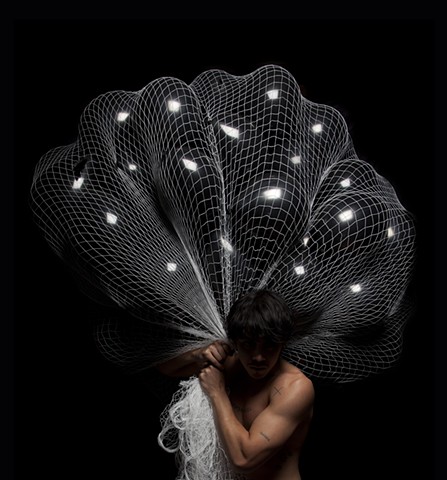 This image is a self portrait where I am carrying a net full of black balloons. The title refers to the character 'Caliban' and his dead witch-mother Sycorax from Shakespeare's 'The Tempest'. In post-colonial interpretations of the play Sycorax is seen as a paradigm for all women of the third world. Caliban is the slave of the protagonist Prospero, who at one point sends Caliban to fetch wood. This image refers to that particular scene but instead of wood, it is black balloons he carries. This is a reference to the black balloons that were tied to the letterboxes of Muslim families and their supporters in the recent 'stop the mosque' protests in Bendigo.