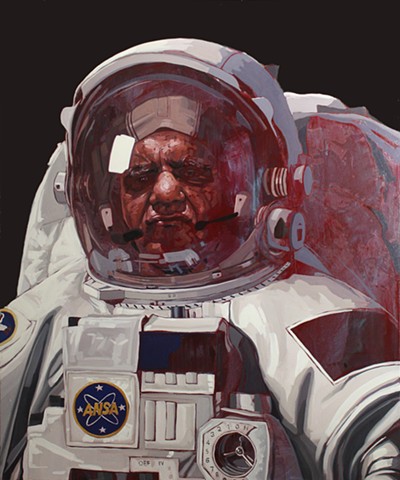 In 2012, Abdullah sat in Bell’s kitchen with artists Vernon Ah Kee and Gordon Hookey and listened to the three of them discuss art, life and politics. ‘I remember asking how an artist survives between shows and Richard chastised me by saying, “by making f***ing good art”. I am proud and honoured to call him a friend and mentor,’ says Abdullah.

‘I see him as mountainous – hence the title – the type of person who fills a room when he enters it. From there it was a small step to visualising him in a space suit, casting a discerning, critical gaze on this country from space as if to say, “you’ve messed it all up”.

‘The ANSA logo on the suit points to this proposition, being the same logo that Charlton Heston’s character wears in Planet of the apes. In this way I have portrayed him as an outspoken astronaut who has arrived on a planet gone mad, and is the only one making sense.’