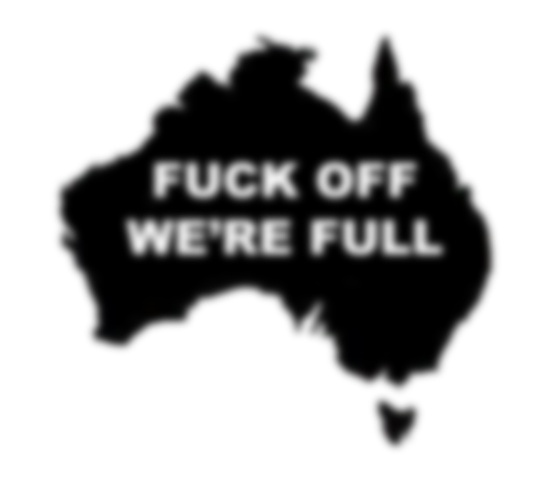 Excerpt from Nathan Beard's essay on 'Them and us'

... Abdullah’s light box installation in Them and Us, a large scale and slightly out of focus rendering of the jingoistic slogan ‘Fuck off, we’re full’ imprinted across the outline of the Australian continent. This slogan has been circulated as a bumper sticker in the past few years as a highly inarticulate rejoinder towards contemporary political issues regarding immigration and refugee detainment within Australia, and I saw the exact colourful message coyly displayed on the windscreen of a ute parked in front of a primary school quite recently. The anxieties facing many Australians who perceive themselves as othered can be directly associated to the racial insensitivity, fear and ignorance emblematized by this blatant message. Abdullah’s self-deprecating work confuses the original intent of the jingoistic slogan, highlighting the irony that as a colonial nation the people espousing such a condescending purview are in ignorance of their own cultural heritage and immigrant personal narratives. In contrasting this ostensibly violent and hateful dogma with sensitive and charismatic interview subjects who articulate a negotiation of Western and traditional Muslim values, Abdullah highlights the poignancy of individual narratives and the dialogues between cultures as a vital and integral method of liberating generations from poisonous self-denial and confusion.